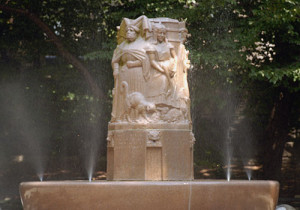 In commemoration of Sophie Loeb.

Works Progress Administration (WPA) artist Frederick George Richard Roth, who worked for the WPA as head sculptor at the Parks Department, and who also created several other sculptures in Central Park including the Dancing Goat, the Dancing Bear, and Mother Goose, plus the animal friezes at the Central Park Zoo, created this Alice-in-Wonderland themed sculpture commemorating Sophie Loeb (1876-1926). Sophie Loeb was a writer who advocated for children and for playgrounds in Central Park. Mayor LaGuardia and Robert Moses attended unveiling ceremony on October 2, 1936.

The statue was originally created for Heckscher Playground, but was later moved to Levin Playground in Central Park, near 77th Street and Fifth Avenue.