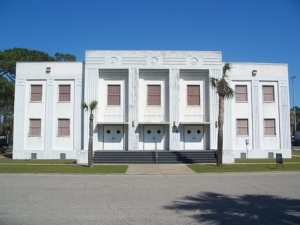 Past Use: Auditorium/Gymnasium. Present Use: Civic Center.

The 1996 National Register documentation notes that the Centennial Building has been the site of centennial celebration of the signing of Florida’s first constitution, which
ran from December 7th to December 10th, 1938. The building was
dedicated on December 7, 1938. It was also used for other political events and civic functions. Also fund raising events, such as the Fireman’s Ball and the March of Dimes
President’s Ball, have been held in the building. It has sometimes
been used for community Fourth of July and New Years balls, high
school proms, basketball games, as an official polling place, and
as a National Guard Armory.

According to National Register documentation, “The Centennial Building, at 300 Alien Memorial Way in Port St. Joe, Florida, was constructed in 1938 with Works Progress
Administration (WPA) funds. The simple, rectangular building has
Art Deco stylistic elements. The masonry structure is covered
with stucco and rests on a concrete foundation. Decorative air
vents to the crawl space are visible along the foundation. The
flat roof is surfaced with built-up roofing material.
The Centennial Building was typical of the kinds of PWA funded projects awarded to cities, counties, and states. The Centennial Building was one of 707
auditorium/gymnasium PWA projects across the country.”

“In 1937 […] Senators Claude Pepper and Charles Andrews, and Congressman
MiHard Caldwell had worked diligently in securing approval of a
WPA project to build a civic center in Port St. Joe. In June
1938, WPA Project No. 20759 was approved and the city of Port St.
Joe received a matching grant of over $35,000 to construct the
Centennial Building.

The building was completed in time for the centennial
celebration of the signing of Florida’s first constitution, which
ran from December 7th to December 10th, 1938. The building was
dedicated on December 7, 1938.”

The structure is adjacent to the Constitution Convention Museum State Park.