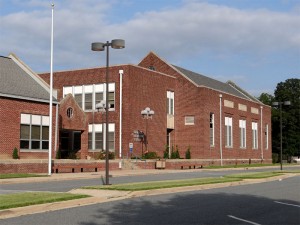 Contracts for the construction of two high schools in Cecil County (Cecilton and Chesapeake City) were awarded to the Lang Brothers of Baltimore by the PWA in December 1938.  The $136,190 contract for the Cecilton high school called for “a two-story and part basement semi-fire proof, consolidated school building to accommodate 450 pupils.”

According to The Cecil Democrat, the contract called for “modern heating, plumbing, and electrical work.” The facilities were as follows:
Basement: A cafeteria, kitchen, boiler room, fuel storage room, and [general] storage room.
First floor: Six classrooms, a teacher room, an auditorium with stage and dressing rooms, and bathrooms.
Second floor: Five classrooms, a home economics room, the principal’s office, and bathrooms.

Cecilton High School became the Cecilton Elementary School in September 1958 upon the opening of — and the transfer of Cecilton high school students to — the Bohemia Manor High School.