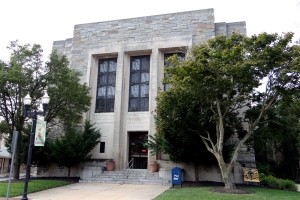 The groundwork for a new, enlarged courthouse for Cecil County was put in place in 1935, when the General Assembly of Maryland authorized the county to “expend $5,000 for a lot of ground on which to build a new courthouse whenever it was needed,” which the county “visualize[d] to be built with the aid of Federal funds”.  A site on East Main Street, about 200 yards east of the then-courthouse, was selected for the new building.
In December 1938 the contract for the construction of the Cecil County Courthouse was awarded by the PWA to Laachi Construction Co., a Baltimore contractor, which bid $232,687 for the job. The Federal Emergency Administration of Public Works provided a large part of the money.  Malone and Williams, of Salisbury, MD, were the architects for the new courthouse, which would be, according to The Cecil Democrat, “a three-story and basement fireproof building, 133 feet long, 60 feet wide, 43 feet in height. It is designed to accommodate all departments of the court administration,” with further space provided for the American Legion and Boy Scouts.  “The first floor will contain vaults, board rooms and offices. The second floor will contain the court room, jury rooms, health department offices, and clinics.  The third floor will contain offices.”  The county would be responsible for the provision of furniture and equipment.
The cornerstone for the courthouse was laid May 11, 1939, and the building was dedicated July 26, 1940.
During the mid-1960s a new county building was appended to the east side of the courthouse at an approximate cost of $1.35 million.  The cornerstone for the addition was laid October 5, 1966 and the expanded building was dedicated August 10, 1967.  The original courthouse now constitutes one of the two wings of the enlarged county building, which surrounds a central plaza and garden.