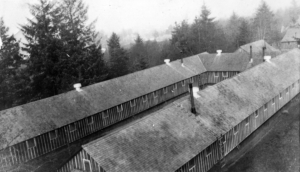 CCC Camp Warrenton housed companies of Civilian Conservation Company (CCC) enrollees with a special mission. Although called upon occasionally to fight fires, their primary charge was stabilizing beaches along Clatsop County’s coastline. As reported by the Daily Astorian, the Columbia River south jetty had “played havoc on the beaches as far south as Gearhart” since its completion in 1913. Planting Holland Dune Grass along with wooden fences was, at the time, an experiment to halt beach erosion.

One report suggests the commitment to this soil conservation project began with the beginning of the Civilian Conservation Corps in 1933. By June 1936, a representative of the Department of Agriculture was able to show local residents how effective Holland Dune Grass was in controlling drifting sand. The CCC enrollees also could report putting twenty miles of picket fences (15,000 pickets per mile) in place to protect roads and property from encroaching sand.

In 1937, Company 491 arrived from Tennessee to further the soil conservation efforts. A sign near the camp’s entrance announced “Howdy Suh! Welcome to ‘Home of the Southerners'” and invited their neighbors to tune in for the Camp’s Saturday evening program. Other entertainment offerings included the camp’s string orchestra. A 1938 article from Portland’s morning newspaper The Oregonian noted that the Camp Warrenton string orchestra provided musical entertainment for the Portland Chamber of Commerce program on the CCC.

Insight into the extracurricular life of CCC enrollees is also offered by photographs of a CCC Camp Warrenton wedding. In place of a military wedding’s ceremonial swords, photographs show the bride and groom taking their vows on a large log with a canopy of shovels providing the wedding arch. The groom and his men wear the CCC uniform. 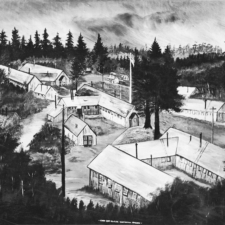 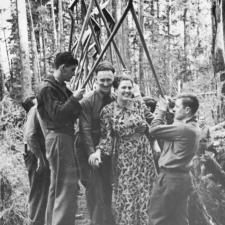