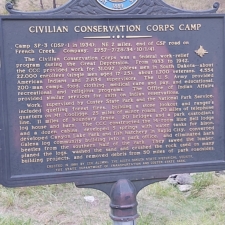 The Civilian Conservation Corps (CCC) maintained a camp on French Creek east of Custer State Park in South Dakota from 1934 to 1941.  It was officially camp SP-3 (meaning State Park #3).  The recruits worked on projects in region under the supervision of Custer State Park rangers and the National Park Service (NPS).

The CCC enrollees built many miles of road, telephone lines and boundary fences. To this they added 20 bridges.  They constructed a fire lookout on Mt. Coolidge, along with a ranger’s residence there, and fought fires and bark beetle infestations. They developed the Blue Bell Lodge and cabins at Custer State Park and Canyon Lake Park in Rapid City, as well as other facilities for park staff use and a fish hatchery in Rapid City.

With further information, we hope to elaborate upon these several projects.

As with all former CCC camps in South Dakota, the state has erected historic markers at their sites, thanks to the efforts of the CCC Legacy, when it was still active.

Since the photograph above was sent to us, we are not positive of the exact location of the camp; but we think it is the present-day site of the French Creek campground.

Project originally submitted by Richard A Walker on October 12, 2021.