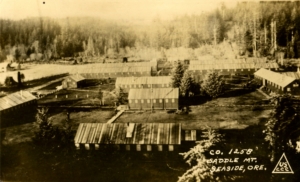 Members of Civilian Conservation Corps (CCC) #1258 arrived at CCC Camp Saddle Mountain near Seaside and Cannon Beach OR in the summer of 1935. The majority of the Company’s enrollees were from New York.

Although the CCC workers occupied tents upon their arrival, they began construction of bunkhouses, recreational halls, officers’ quarters and other camp buildings. With the camp’s completion, the encampment grew to its full strength of 200 men.

Located near what was then the Nehalem Highway (now US Hwy 26), the camp’s site was rented by the state to the federal government. Improvement of that land for Oregon State Park use was a primary task of Company #1258, along with development of other state park properties in the area. Spur camps at Ecola State Park and Neah-Kah-Nie Mountain drew additional CCC enrollees from Camp Saddle Mountain for the new oceanfront parks.  Company #1258 workers improved Saddle Mountain State Park, Tongue Point State Park near Astoria, Ecola State Park at Cannon Beach, and Short Sands Beach (now Oswald West State Park) in their contribution to Oregon’s State Park program. Tongue Point State Park no longer exists. Supervision of their work involved both the National and State Park services.

As noted in the Vancouver Barracks Report of 1937, Camp Saddle Mountain enrollees also provided extensive firefighting service: “Construction of fire breaks, roadside cleanup and general fire suppression also have been part of the work program. During the 1936 fire season emergency calls included 1,241 man-days of forest fire fighting. Enrollees were called out to assist in control of numerous other conflagrations during the 1937 season. Several times enrollees aided in searching for lost persons in the forests of Clatsop County.” 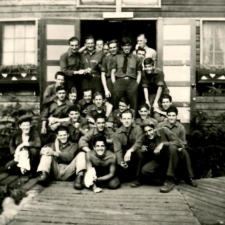 Location notes: The CCC Camp was located north of what is now US Highway 26, just east of the junction with Highway 53. The entrance to Saddle Mountain State Park is near the former location of the camp.