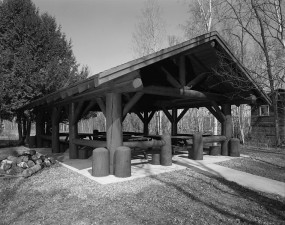 Originally constructed by the Civilian Conservation Corps at another site in Minnesota, the Picnic Shelter was moved to the Rabideau Camp by the U.S. Forest Service in 1986. It is architecturally significant as an example of the finely crafted, labor-intensive log construction built throughout Minnesota's state parks and national forests during the Depression Era.

“The camp is located six miles south of Blackduck,
Minnesota on County Road 39…

Rabideau was built and maintained by Company 3749
out of Bennett Springs, Missouri. They remained here
until January 1936 at which time Company 708 of Bena
took over the camp. They arrived at Rabideau in open
trucks in temperatures as low as 45 below zero and
remained there until the program ended in 1942…

Camp Rabideau is located in a 112-acre tract that was
purchased in 1934. The buildings are situated about 100
feet apart and are surrounded by tall trees forming a
large glade on which the original Mess Hall used to
stand. This building burned in the 1930’s and the bakery
was to become the mess hall. Benjamin and Carl’s
Lakes are adjacent to the camp. An open air picnic
shelter that was built by the CCC was moved here from
Cut Foot Sioux in 1986. There are still 15 of the original
buildings remaining. Restoration is ongoing at the camp.
The camp is to remain as a honor to all who served as
CCC Corpsmen.”