Civilian Conservation Corps (CCC) Camp Navy-1 was created at Yorktown, Virginia, on November 1, 1935, for the purposes of improving the Naval Mine Depot (a 20-square mile area that is now called “Naval Weapons Station Yorktown”). The camp housed Company 2305, one of several African American CCC units in the area.

Prior to its involvement at the Naval Mine Depot, and prior to its re-designation as “Navy-1,” the same camp was devoted to soil erosion control along the York River and along Colonial Parkway. This work was part of a larger CCC project (involving at least 4 other African American companies) to develop Colonial National Historical Park (CNHP), 1933-1941.

During their CNHP-related work, the men of 2305 acquired an unusually strong reputation for safety; this led to their assignment at the Naval Mine Depot, where, “It is absolutely necessary to reduce fire hazards to the minimum… they went to work clearing woods of unnecessary trees and brushes. Fire breaks were cut in the most dangerous places and areas so that if fire began it would be limited to a very small area. Fire trails were cut to make all sections easy of access. Good roads were built to facilitate movements of the patrol and other necessary units of the Naval Mine Depot” (Dist. 4, Third Corps Area history, 1937).

Camp Navy-1 offered its enrollees vocational training, such as carpentry and electrical wiring; athletics, music, and drama; and an attractive living area – “The Mess Hall has been brought to a high state and standard of beauty and conveniences. The camp area has been beautified with flowers and shrubbery” (Dist. 4, Third Corps Area history, 1937).

Camp Navy-1 was located in CNHP, near Surrender Field. We don’t know the precise location, but have placed our marker near the field. The camp appears to have been closed at the end of 1937, presumably after its work at the Naval Mine Deport was completed and CCC priorities or funding had changed.

NB: CCC camps in the Jim Crow-era South were always segregated, but that was not true everywhere until 1935; for further discussion, click here. 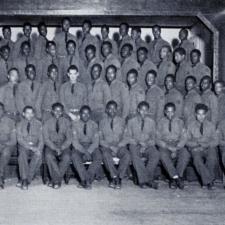