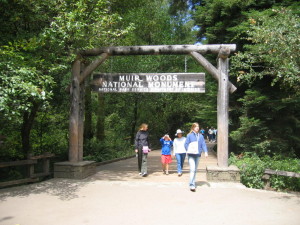 The Civilian Conservation Corps (CCC) established a camp on Mount Tamalpais in October 1933 and CCC enrollees did extensive work around Mount Tamalpais in Marin County CA, north of the Golden Gate.  They carried out improvements in Muir Woods National Monument on the south flank of the mountain and in Mt. Tamalpais State Park, which encircles the summit.

The National Park Service says this about the camp:

“October 1933: Often called the “busiest month” in the history of Muir Woods, this month saw the arrival of the Civilian Conservation Corps, or the CCC, to the park. Up to 200 men were stationed at this new camp, initially called Muir Woods Camp NM-3 The “NM” stood for National Monument. The camp was later changed to Camp Mt. Tamalpais SP-23, with the “SP” referring to State Park….The CCC completed its last project in Muir Woods in May 1941, and was disbanded shortly thereafter.” (http://www.nps.gov/)

In fact, Camp Muir Woods NM-3 began as a tent camp set up on the north side of Mt Tam from Muir Woods near Lake Lagunitas, according to Matt Cerkel of Marin Water District.