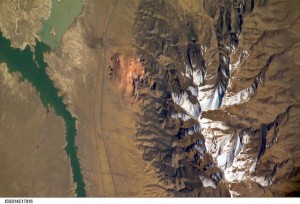 The Civilian Conservation Corps (CCC) established a camp near Lovelock NV during the 1930s, officially BR-36, popularly called Camp Lovelock or sometimes Camp Pershing. It was located near the main road north of town (along what is now Interstate 80). No trace of it remains today.

CCC enrollees helped with improvements to the Humboldt River Project of the Bureau of Reclamation and the irrigation system of the Lovelock Valley (then private, but today part of the Pershing County Water Conservation District). They worked on ancillary construction jobs during the final stage of construction of the Rye Patch Dam and Reservoir and they cleaned and improved canals, ditches and water control structures throughout the valley.

Other Camp Lovelock tasks included constructing a 1.25-mile telephone line from the Bell Telephone tie-in to the county government office.