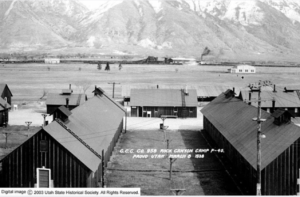 In 1935, the Civilian Conservation Corps (CCC) set up Camp F-40 at the Provo Fairgrounds (now the Provo Airport).  It was a permanent camp with wooden buildings that operated until 1941.  It housed CCC Company 958, which moved there from Camp F-30 in Hobble Creek Canyon — first in the winters of 1934 and 1935, then full time from 1936 on.

The letter F meant that CCC projects at this camp were carried out under the direction of the US Forest Service, in what was then the Wasatch National Forest (now Uinta-Wasatch-Cache National Forest). The name “Rock Canyon” may be a carryover from the earlier camp PE-202 designation at another site, but this is a mystery to us; it certainly does not apply to the mudflats where F-40 was located (now the Provo Airport).

Working out of Camp F-40, the CCC enrollees of Company 958 made many improvements around the central Wasatch area. These included recreational facilities; water conservation projects;  roads and bridges; soil conservation and ranch work.  Not all this work can be identified precisely, but some can be verified from reliable sources.

The US Forest Service provides this summary of the work of Company 958 at camps F-30 and F-40:

“During their eight years of operation, men from these two camps created a fine record of work which included building eight campgrounds in Hobble Creek and Payson Canyons, four Forest Service ranger stations, dams at the mouths of Little Rock, Rock and Slate Canyons, upgrading or building roads in Hobble Creek (to Springville Crossing), Rock Creek and the Nebo Loop Road, several bridges, stock trails to and through Spanish Fork Canyon and other duties such as fire fighting.”

Baldridge (2019, pp. 122-23) provides yet more detail on the work of Company 958. The  CCC enrollees built campgrounds at Hobble Creek, Payson Canyon, Diamond Fork, Wolf Creek and Daniels Canyon (“among others”). They added over a mile of water pipelines (presumably for the campgrounds); amphitheaters at Mutual Dell and Aspen Grove; horse trails at Rock and Slate Canyons; a stock bridge over Sixth Water Creek; six miles of range fencing and seven stock-water facilities; and small dams on Hobble Creek and Diamond Fork. They also fought lodgepole pine beetle infestation along the Provo River and built forest service warehouses and office in Heber and Spanish Fork, plus a warehouse in Provo.

In addition, Company 958 at F-40 built another CCC camp, MA-1, in 1939, just next door to Camp F-40.  Another company moved into MA-1 and worked on a big city harbor project for Provo, 1939-41, which was only half complete when funding was terminated.  Camp MA-1 is now the site of Utah Valley University and the harbor project is the site of Utah Lake State Park (Baldridge, pp. 210-11). 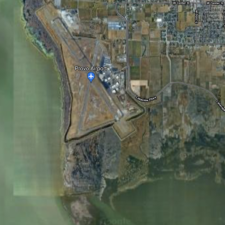