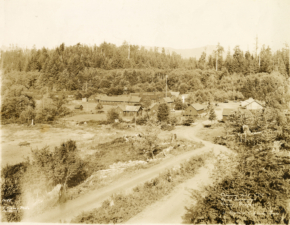 Civilian Conservation Corps (CCC) Camp Boyington served a company of CCC enrollees within the first year of the New Deal. Construction began on the camp outside of Astoria, near the unincorporated town of Olney, in October 1933.

The company of 200 “tree troopers” arrived within months of the historic Tillamook Burn that occurred in the summer of 1933. The CCC enrollees provided management and firefighting services on private forest land in the northern Oregon Coast Range.

The 1937 report of the Vancouver Barracks CCC District noted that the Company was identified as “a peak camp” by 1935 when its Company number changed from #1316 to #2908. This is noteworthy as a reflection of an expansion of the CCC program. As the report explains, Camp Nehalem in Tillamook County was built during the summer of 1935 as a subcamp to Camp Boyington. By completion of the new camp in November 1935, Company #2908 was transferred to Camp Nehalem and Camp Boyington became its subcamp. The system of subcamps allowed for mobility in firefighting.

Location notes: The location of Camp Boyington has been described as halfway between the unincorporated town of Olney and the summit of the Nehalem Highway (Hwy 202). At the time of its construction, it was privately owned forest.