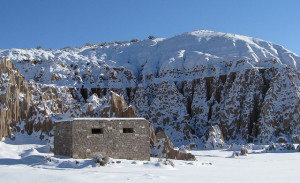 Cathedral Gorge State Park, outside Pioche, Nevada, was first constructed during the 1930s by the federal Civilian Conservation Corps (CCC).

“Cathedral Gorge is also the site of a water tower that the Civilian Conservation Corps (CCC) built and used when constructing the park in the 1930’s.” (lccentral.com)