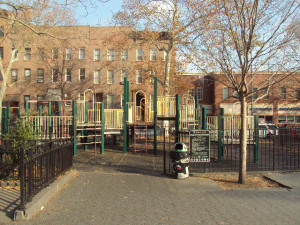 Carroll Park has been a public park since the 1850s. A March 27, 1936 Department of Parks press release announced the opening of this new WPA playground in the park:

“The Department of Parks will open ten new playgrounds Saturday, March 28, making a total of 125 added to the recreational system in two years.

All of these playgrounds were constructed es Works Progress Administration projects.”

Further improvements to the playground, including basketball courts and a play apparatus for older children, were announced in October of the same year.

The park and play equipment were further updated in the 1960s and 1990s.