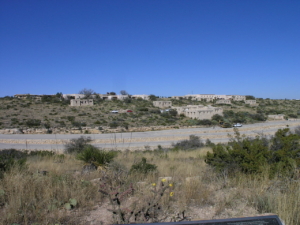 The Civilian Conservation Corps (CCC) operated a camp at Rattlesnake Springs from 1938 to 1942 and conducted substantial construction and development work at Carlsbad Caverns National Park, including at what’s now known as the Carlsbad Caverns National Park Historic District. Among untold other projects and improvements the CCC undertook trail development and landscaping work and constructed residences and maintenance facilities that are still in use today.

The Historic District at Carlsbad Caverns National Park comprises a number of Pueblo Revival buildings constructed by Park personnel in the 1920s and 1930s and several stuccoed adobe buildings in the New Mexico Territorial Revival style by the CCC in the early 1940s. Some of the trails and landscaping were also built by the CCC, but most predate this program. The district is eligible for the National Register both because of its association with the CCC. Furniture and tinwork were also created for these structures and they are in use today.

Additionally, public works funding was used to improve the parking facilities by Bat Cave Draw in what’s now known as Carlsbad Caverns National Park Historic District in 1935, and the switchback trail that leads to the entrance of the caverns was improved in 1936. The specific New Deal agency, if any, associated with these projects is not presently known to Living New Deal.

Two parking terraces, cut into the hillside at the bottom of Bat Cave Draw, were completed by September 1927 … In 1935, plans were prepared under the direction of A. W. Burney, then NPS Acting Chief Engineer, for enlargement of the parking lot. The work was done with Public Works Project funding. At the lower side of the hill, near the arroyo, the inner retaining wall of a double wall that formed a cactus bed was removed, leaving only the outer wall a few feet farther downhill. At the upper side of the hill, the bedrock was cut back to add a few more feet of parking space. The parking lot was also asphalted at this time.

… The trail replaced a long flight of wooden stairs that had been constructed at the cave entrance in 1925. As originally constructed in 1930, the trail had 8 switchbacks, the position of the top switchback is now occupied by the amphitheater, and the lower guard wall of the amphitheater is built upon the curved contour of the lower side of the top switchback. In 1936, the trail was asphalted in accordance with plans by A. W, Burney, NFS Acting Chief Engineer.