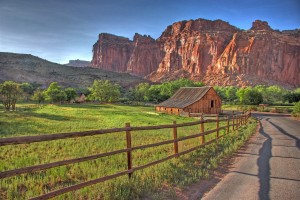 Continuing the tradition of preservation

The first improvements to Capitol Reef were made by the Civilian Conservation Corps (CCC), which established Camp NM-2, later called NP-6, located to the west of Fruita at Chimney Rock.   The Fruita ranger station and a powder magazine  built by the CCC still stand.  Later, the Sulphur Creek bridge and some road work were done by the Works Progress Administration (WPA).

The CCC Powder Magazine built into a hillside is on the National Register of Historic Places. It was used to store explosives for construction of improvements to the park, since much of the CCC’s work involved quarrying sandstone blocks and slabs, which required explosives.  The walls are native red sandstone, coursed, with a stone slab for a roof. 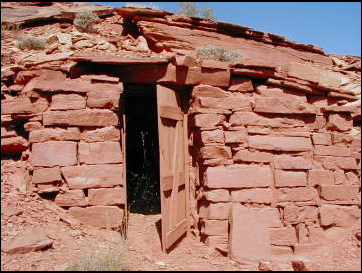