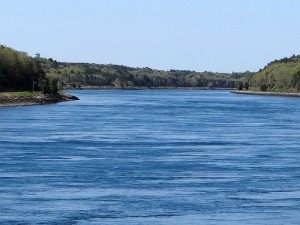 The Cape Cod Canal is an artificial waterway traversing the narrow neck of land that joins Cape Cod to mainland Massachusetts. First constructed in the early 20th century, the canal was widened with WPA labor.