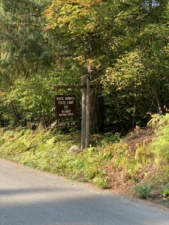 Interest in winter sports, particularly skiing, grew in Oregon during the 1920s. Given the Willamette National Forest (WNF) management’s commitment to recreation and the availability of Civilian Conservation Corps (CCC) labor, US Forest Service Staff worked with local outdoor groups such as Eugene’s Obsidian Club to identify locations within the forest for ski areas as early as 1934. The White Branch Recreational Area was  one of the first such projects.

A survey crew from CCC Camp Belknap located land for the White Branch project and CCC enrollees began work in the summer of 1934. They built a two-story lodge, ski and toboggan runs, a water system for the recreational facilities, and an access road. As one CCC worker described in an oral history project (Silvermoon, p. 19), “You might say the whole thing was . . . (built at once) the logs for the lodge came off the side of the mountain where the ski slide was built. If I remember correctly there was a water system put in, all the toilets were built, the lodge was built, the fireplaces were built, the whole thing was going more or less at one time.”

When the winter facility opened in early 1935, the weather cooperated and an enthusiastic public celebrated with over 1200 in attendance. Eugene’s Obsidian Club held the first lease of the facility. Unfortunately, over time it became clear that the ski area was too low for reliable winter sports conditions. In 1949, the Eugene recreational group gave up the facility and the White Branch Ski Area was used for summer camps. The Association of the Churches of God took over the lease with the US Forest Service in 1958 and has operated the facility as a summer youth camp since that time.

With highway improvements, CCC enrollees worked on other ski lodge projects at higher elevations. The Santiam Pass Lodge is an example of a more successful ski facility undertaken in the WNF with the help of the CCC program. 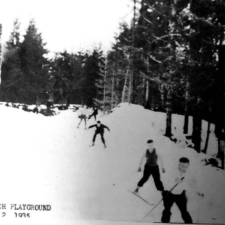