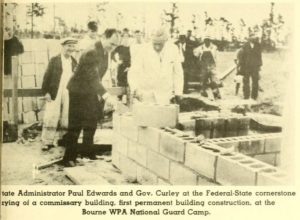 “Between 1935 and 1940, Massachusetts and the federal government, primarily using Works Project Administration funds, constructed 63 buildings (all but Buildings 102 and the old Williams Hospital have since been demolished) and two, 500-foot (150 m) wide turf runways at Otis Field. The project was the largest WPA project in state history, employing over 600 workmen. In 1938, Governor Charles F. Hurley dedicated Camp Edwards, named after the former commander of the 26th Infantry Division, Major General Clarence Edwards.” (Wikipedia)

The Bourne WPA Notional Guard Camp Project is the largest undertaking of this kind in the country.

It is twenty-three square miles in area, so huge that Cambridge and Somerville could be loosely placed within its borders.

WPA workmen are constructing eight miles of bituminous macadam roads, eighteen and a half miles of gravel roads, 50 bath-houses, one hundred and twenty-four kitchens and mess-halls, four warehouses, a hospital, an administration building and a gasoline station.

Twelve hundred acres of scrub land have been cleared for the parade grounds. A complete water system for 16,000 persons, including wells, a pumping station, a filtration plant and over four and a half miles of pipe will be installed. There will be a complete and modern sewage system and a camp lighting unit.

Four fire stations will be erected in different sections of the camp and 300 small and 400 large tent floors will be built.

At present 500 men are engaged on the project. This number will be augmented with more men as work progresses. Included among those employed are laborers, masons, painters, plumbers, carpenters, electricians, pipe layers, rodmen, transitmen, truck drivers, timekeepbrs, clerks, draftsmen, foremen, and engineers.

A fleet of 51 trucks take the WPA workers to the camp from Falmouth, Onset, Sagamore, West Wareham, Wareham, Buzzards Bay, New Bedford and Fall River. There is no charge to workers or this aid.

Last month these trucks were driven more than 100,000 passenger miles without a single accident.

Additional details, Official Project Numbers, total project costs, and sponsor information relating to 40 W.P.A. projects undertaken at Camp Edwards can be found in the DoD Heritage Assessment identified as a source, below.