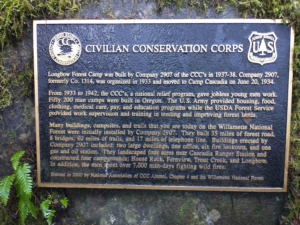 Camp Cascadia, in the Willamette National Forest (WNF), housed members of Civilian Conservation Corps Co. #2907 from June 20, 1934 until their move to Detroit, Oregon in June 1938.

Camp Cascadia was one of four major CCC camps located in the WNF, housing approximately 200 enrollees. The camp was located at the confluence of Canyon Creek and the South Santiam River.

As summarized on a plaque at Longbow Organization Camp that honors the enrollees’ service:

The plaque was erected in 2000 by the National Association of CCC Alumni, Chapter 4 and the Willamette National Forest.