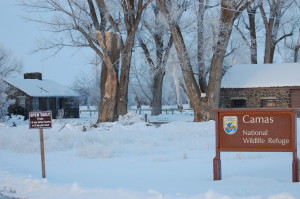 Camas National Wildlife Refuge lies in southeast Idaho along the Camas River and just west of the Grand Tetons of Wyoming.  Its 10,000 acres are half lakes, ponds, and marshlands and half grass sagebrush uplands, meadows, and farms.  It is a major viewing site for swans, geese and curlews, among other birds and wildlife.

Camas NWF was created under the New Deal in 1937.  Lacking further details, we can only say it is likely to have been enacted by a presidential Executive Order and carried out by the Bureau of Biological Survey, as were most wildlife refuges of the New Deal. The land was purchased from a large livestock ranch known as Idaho Livestock Lands and small parcels homesteaded by families, which were failing in the Great Depression.

According to the US Fish & Wildlife Service (successor to the Biological Survey), “In the 1930s and early 1940s, crews from the Works Progress Administration (WPA) constructed the refuge headquarters buildings, water control structures and bridges.”