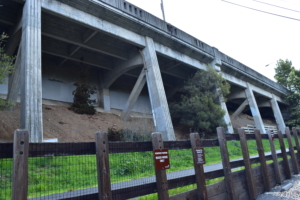 The original two-bore Caldecott Tunnel was built with the aid of the Public Works Administration (PWA). Out of a total cost of $4 million, the PWA provided $1.1 million, the state $700,000 and the highway district $2.3 million in bonds, which were repaid from gas tax revenues (Oakland Tribune 1937).

Plans for the tunnel had long been in the works, as automobiles began to replace trolleys after World War I.  A Joint Highway District was created in 1929 to undertake the project and money was sought from the federal government from the outset of the New Deal.  Once PWA funding was secured, construction began in mid-1934 and was completed in 1937.

As part of the project – then known as the Upper Broadway Low Tunnel – Broadway was extended up the canyon from where it once met Chabot Road. This part is commonly known as Upper Broadway.  In 1937, the Landvale Bridge was built over  Upper Broadway  and new on-off ramps were added on both sides of the approach. The bridge connected Tunnel Road in Berkeley with Mountain Boulevard in the Montclair District of Oakland, via Landvale Road.

Landvale Road south of the bridge was routed between Lake Temescal and the PG&E Claremont Substation.  To accommodate the new road, the Sacramento Northern interurban train line had to be moved slightly west and the eastern arm of Lake Temescal filled in for both to pass over a branch of Temescal Creek (which today runs through culverts all the way up the canyon toward the Caldecott Tunnel; the culvert can still be seen where it empties into the lake).

Construction of the original tunnel was carried out by the “Six Companies” joint venture, led by Oakland’s Bechtel Corporation and Kaiser Engineers, who had built Hoover Dam.  Presumably, they also built the approach roads and bridges, though this needs confirmation.

The entire highway system and canyon landscape west of the Caldecott Tunnel has been massively reengineered over the years.  The old Upper Broadway approach road was superceded by State Highway 24 (former Grove-Shafter Freeway) in the 1960s.  A remnant survives, however, along the south side of the freeway, as can be seen in the 1934 overpass that still takes Upper Broadway over Golden Gate Avenue.  Some of the roadway above the bridge, where it hugs the hillside and passes Lake Temescal Park, is probably original, too.

The Landvale Bridge was removed in 1964 when the freeway was extended to the Caldocott Tunnel. The Warren freeway (State Highway 13) was built in stages, c. 1950-60, south through the Oakland hills.  Nevertheless, traces of Landvale Road still exist today.  A piece of it runs alongside the PG&E substation, where it dead-ends, and beneath a portion of it can be seen retaining wall and massive, angled support struts (which may mark the south end of the old Landvale Bridge.  These loom over the old train route (now a bicycle path), which takes off from the northeastern corner of Lake Temescal Park.

Another piece  of former Landvale Road can be seen where Highway 13 passes over Broadway Terrace.  Parts of the underpass are of the same design as the old road (and the abutments for the former Sacramento Northern are still in place, too).  Broadway Terrace was widened and lowered to pass under the old road and there are still date stamps from 1936 in the concrete pavement as it descends on the west side.

A third portion of Landvale Road remains at the south entrance of Lake Temescal Park, which passes through a tunnel built to carry a connector from Landvale Road to Broadway Terrace (which still serves as the exit from Highway 13).  The style and age of the tunnel’s concrete match that of other remnants, though the date painted on the tunnel is too faint to read.  Further confirmation is needed. 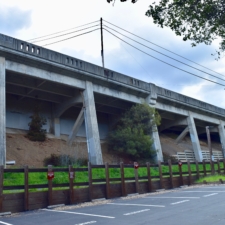 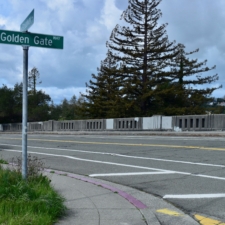 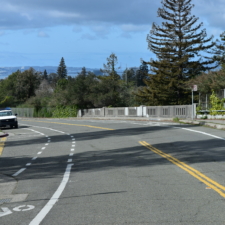 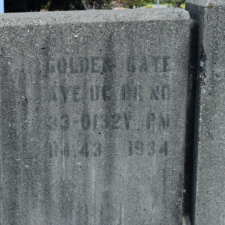 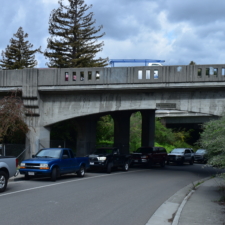 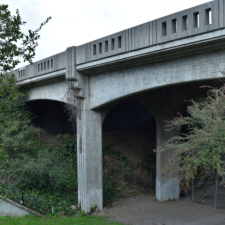 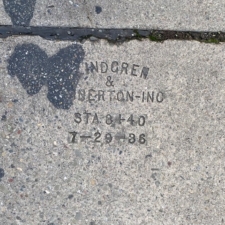 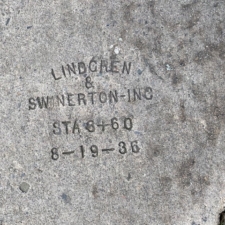 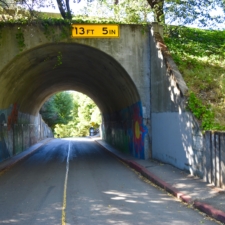 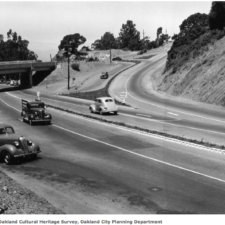 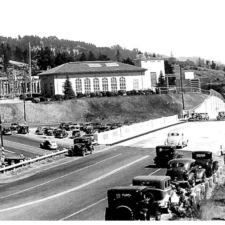 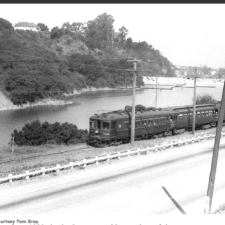