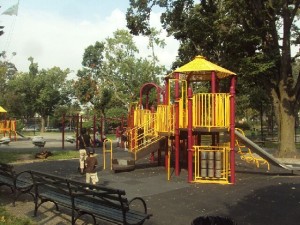 A June 1936 press release announced the opening of a new playground at this site in Crocheron Park with “a large central grass panel surrounded by play apparatus for small children.” NYC Parks confirms that this playground was built on land “acquired by the City in 1925 and turned into a park in 1936 at the request of the Bayside Civic Association.”

Although the 1936 press release does not mention the WPA or other New Deal agencies, researcher Frank da Cruz explains here that almost all New York City Parks Department projects between 1934 and 1943 were carried out with New Deal funds and/or labor, and that after April 1935, the WPA quickly became the main source of this support.

Today, the playground has “an aquatic theme, with a spray shower made up of stone clams, two shells carved into the brick and wrought iron entranceway, and a starfish in the middle of the park.”