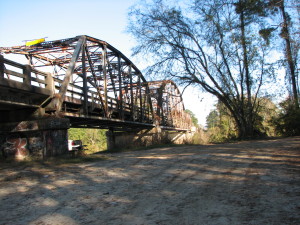 The Burr’s Ferry Bridge is built over the Sabine River where Texas State Highway 63 and Louisiana State Highway 8 meet. The bridge consists of three Parker though truss spans and 34 concrete girder spans. At the time the bridge project was under consideration, the road was an “improved dirt road,” reportedly impassable much of the year with a toll ferry across the Sabine River.

Congress passed the Emergency Relief Appropriation Act on April 8, 1935. This act gave Texas and Louisiana grant money for road and bridge construction. Projects funded under this act were subject to special labor provisions. Among other things, the provisions required that at least 90 percent of the laborers be obtained from public relief rolls and that hand labor methods be used whenever possible.

The bridge engineers at the Louisiana Highway Commission were primarily responsible for designing the bridge with input and approval by the Texas Highway Department. W. Horace Williams Company of New Orleans submitted the low bid of just under $235,000. Construction on the bridge began on August 12, 1936 and was completed September 13, 1937. The bridge is still in use as a vehicular bridge and was listed on the National Register of Historic Places on May 18, 1998.