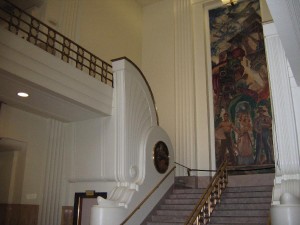 “Burbank Industry” – This large 8′ x 24′ mural is in the Rotunda of the Burbank City Hall. “In 1964 the bottom third was removed to make way for a bridge to the then-new Municipal Services Building behind City Hall. It was kept in storage for 37 years. The mural was restored in 2001 and the two sections were reattached by fine arts conservation experts.”

“Four Freedoms” – “The 11 feet by 22 feet mural by Hugo Ballin was inspired by President Franklin Delano Roosevelt’s 1941 “Four Freedoms” speech given at the signing of the Atlantic Charter. It is one of Ballin’s masterworks. The mural depicts scenes and figures symbolic of the Freedom of Speech, Freedom of Religion, Freedom from Want, and Freedom from Fear.”

“…As the artist wrote in 1943: “The lower section of the mural depict [sic] these freedoms put into practice in everyday experience.””