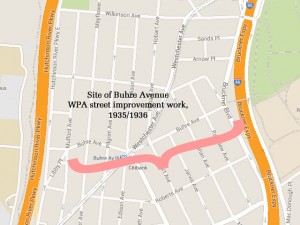 The federal Work Projects Administration put many men to work starting in 1935 with a Bronx street repair and maintenance project along roads throughout the borough. The streets, many of which in New York City were still unpaved, were surfaced with penetrated macadam. Roads improved included the 0.4-mile stretch of Buhre Avenue between Mulford Ave. and what was then Eastern Blvd. (Eastern Boulevard provided the foundation for what is now the Bruckner Expressway.)