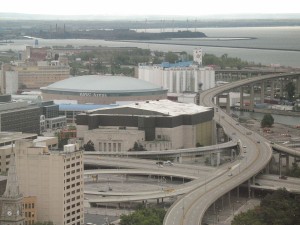 "Two homes for the Buffalo Sabres are visible: Buffalo Memorial Auditorium (1970-96, in front) and HSBC Arena (1996-present). Taken from the observation deck of Buffalo City Hall."

Sources differ with regard to the source of the New Deal funding — an AP article claims it was the PWA while others claim the WPA constructed the building.

The Municipal Auditorium was demolished in early 2009.