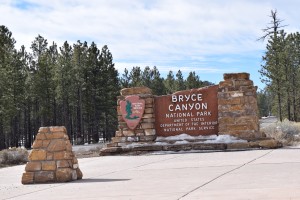 Many small improvements were made to Bryce Canyon National Park during the New Deal, along with the other substantial additions noted on accompanying pages (see thumbnails to the right).

In 1933-1934, the Public Works Administration (PWA) provided the National Park Service with modest funds for four small projects: two employee cabins, a comfort station, an extension to the office building, and an equipment shed.

From 1933 to 1940, the Civilian Conservation Corps (CCC) conducted timber thinning and burning to destroy bark beetle infestations, built many miles of cattle fences around the park, created erosion control structures, and added signage throughout the Park, including the principal entry sign.