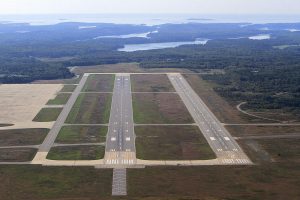 The Brunswick airport was originally built in 1935 by the Maine Emergency Relief Administration, a state division of the Federal Emergency Relief Administration after a survey of airports in the state by Capt. Harry M. Jones with the intention of building a chain of airports in coastal towns, inland towns, and lake resorts. It built 1 NW – SE 1800 x 50 gravel runway and 1 E – W 1800×100 graded runway.

Naval Air Station Brunswick was developed and occupied in March 1943, and was first commissioned on April 15, 1943, to train and form-up Royal Navy Fleet Air Arm squadrons with Vought Corsairs, Grumman Avengers and Grumman Hellcats. The 1,487-acre (6 km²) station was built in part on land that was donated by the town of Brunswick. By the early 1940s the town was using most of this land to operate a small municipal airport, which would become the core of the air station. The station was deactivated in 1946 and it became a municipal airport again. Because of the Cold War, the base was re-occupied as a Naval Air station until May 31, 2011 [when] the base was officially decommissioned. Navy officials handed over the remaining property to the Midcoast Regional Redevelopment Authority. Property is being redeveloped for civilian use as Brunswick Landing. This started with the opening of the Brunswick Executive Airport.