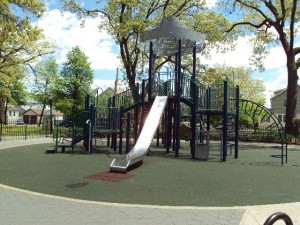 In November 1937, the Department of Parks announced the completion of a new playground at Weller Ave. and Brookville Blvd in Brookville Park:

“the new playground is equipped with swings, seesaws, slides, jungle gym, sand tables, playhouses, ping pong tables, horizontal bar and ladder, basketball and volley ball courts; also, a circular wading pool surrounded by shade trees and permanent concrete benches. Brookville Park, which occupies a long narrow valley and is entered from the Sunrise Parkway at the north, is being completely constructed as a modern park with modern facilities, of which this playground forms one unit. With the completion of the planting and preparation of lawn areas, the balance of the park, except for grass seeding, will be completed by the end of the year.”

Although the 1937 press release does not mention which New Deal relief agencies were involved, researcher Frank da Cruz explains here that almost all New York City Parks Department projects between 1934 and 1943 were carried out with New Deal funds and/or labor, and that after April 1935, the WPA quickly became the main source of this support.