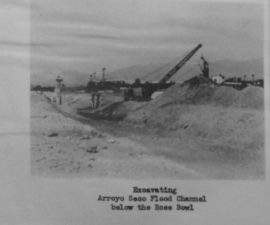 “The Brookside Park Improvements, WP 25, WP 5702, WP 5704, WP 6978, WP 7716, WP 8101, WP 9534, WP 9624 and WP 9810, sponsored by the City of Pasadena, comprise a diversified construction program to improve the facilities and beauty of the park for the comfort, safety, and convenience of the public. Brookside Park, in the City of Pasadena, is a major recreational center, located in the Arroyo Seco and is one of the most popular parks in Los Angeles County. Many major golf tournaments are held on the Brookside course each year and the annual New Year’s Day football game is played in the famous Rose Bowl which is situated in the center of the park.
The major item of work, occasioned by the flood of March 1938 which damaged the golf course, Rose Bowl and other park improvements, is the construction of a reinforced concrete lined flood control channel 2-1/2 miles in length having both rectangular and trapezoidal sections varying from 40 to 60 feet in width and having a depth of 11 feet. The channel, which drains an area of 37 square miles and has a capacity of 22,000 cubic feet per second, will connect with the improvements to the Arroyo Seco channel being constructed under the sponsorship of the City of Los Angeles. When complete, the entire Arroyo Seco channel will be completely controlled from Devils Gate Dam to the Los Angeles River with the exception of a 2 mile section in the southern portion of Pasadena. This work will involve 160,000 cubic yards of excavation, 867,000 square feet of grading and 26,400 cubic yards of concrete.
Included in the program are various appurtenant improvements to the famous Rose Bowl, the scene of the annual New Years Day football classic, and other amateur athletics, school commencement exercises, pageants, drills, benefit entertainments and other public gatherings requiring a large seating capacity. Seven new comfort stations were built with the necessary sanitary sewers to accommodate the large crowds attending the Rose Bowl events. Six pedestrian bridges, over the drives and the adjacent flood control channel, were constructed to provide direct and safe access to the comfort stations and the stadium itself. The project also involved the installation of 1,300 lineal feet of 23 inch reinforced concrete pipe to properly drain the playing field, landscaping of 50 acres of parking area and surrounding grounds, and renumbering the 85,000 seats in the Bowl.
Work on the golf course consists mainly of enlarging and improving the clubhouse, placing of 60,000 cubic yards of fill and 20,000 cubic yards of top soil. Three large concrete pedestrian bridges were relocated after the flood and three additional steel bridges were constructed over the new channel.
Other park improvements include the construction of bridle trails, baseball bleachers, picnic areas and many other recreational and service facilities. To date, these improvements have required a total expenditure of $948,040 of which $828,317 was derived from Federal funds.” 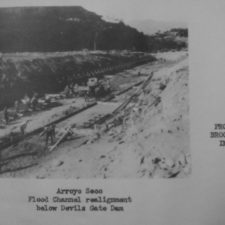