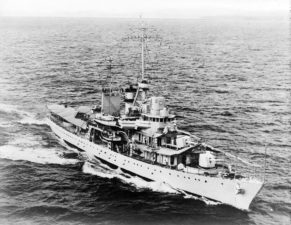 The USS Erie was built in the New York Navy Yard (Brooklyn Navy Yard) between 1934 and 1936. It was funded by the Public Works Administration (PWA).

The Brooklyn Navy Yard operated as a Navy facility from 1801 until 1966. It built two warships, USS Brooklyn and USS Erie under the National Industrial Recovery Act of 1933 (NIRA). NIRA gave president Franklin D. Roosevelt the authority to build ships and an agency, the PWA, to pay for them.