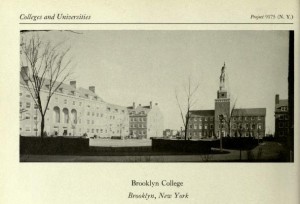 Brooklyn College was created in the 1930s with the assistance of the New Deal.  The five original buildings, including a library and gymnasium, were built with PWA funding and the grounds were landscaped by WPA workers.

The college’s web page tells the story as follows:

“Founded in 1930, Brooklyn College was New York City’s first public coeducational liberal arts college. The school was envisioned as a stepping stone for the sons and daughters of immigrants and working-class people toward a better life through a superb — and at the time, free — college education…

Despite being in the throes of the Great Depression, progress was made surprisingly quickly. On Dec. 21, 1934, the city’s Board of Estimate approved the purchase of the Midwood lot for $1,625,528. In January, the Public Works Administration of the federal government allocated $5 million for the buildings’ construction. And on Oct. 2, 1935, Mayor Fiorello La Guardia, in the presence of Boylan and Borough President Raymond V. Ingersoll, took a silver-plated shovel and symbolically broke ground for the official beginning of Brooklyn College’s new campus. Workers enlisted in the Works Progress Administration (WPA) completed most of the buildings and landscaping within two years.

When President Franklin D. Roosevelt came on campus and laid the cornerstone for the gymnasium, the final building in Evans’ plan, he said, “I am glad to come here today and to wish Brooklyn College the fine and successful future that it deserves. May it live through the generations to come for the building up of a better American citizenship.””

A 1939 PWA publication described the recently completed project as follows:

“Brooklyn College is part of the College of the City of New York and is located on a 40-acre plot of ground in the geographical center of the Borough of Brooklyn. It consists at present of five buildings grouped in such a way that they will eventually form part of a much larger group.

The campus is oval in shape. The library with its tower is at one end of the oval flanked by the academic and science buildings and faced at the opposite end by the gymnasium. The heating plant is placed off campus but near enough to be easily connected to each building by tunnels.

The library contains about 125,000 volumes and seats 700 students in addition to rooms for general study. The academic building contains 200 classrooms, offices for the president, the board of higher education, the faculty, the deans, the departments of art and music, four lecture halls seating 800, and a cafeteria seating 1,750 students. The science building is similar in size to the academic building and houses the departments of chemistry, physics, and biology. The gymnasium building has gymnasiums for men and women, four exercise rooms, a hospital, and a swimming pool.

Construction is fireproof throughout, exterior walls being of brick and roofs of slate. The project was completed in December 1937 at a construction cost of $5,450,170 and a project cost of $5,847,776.” 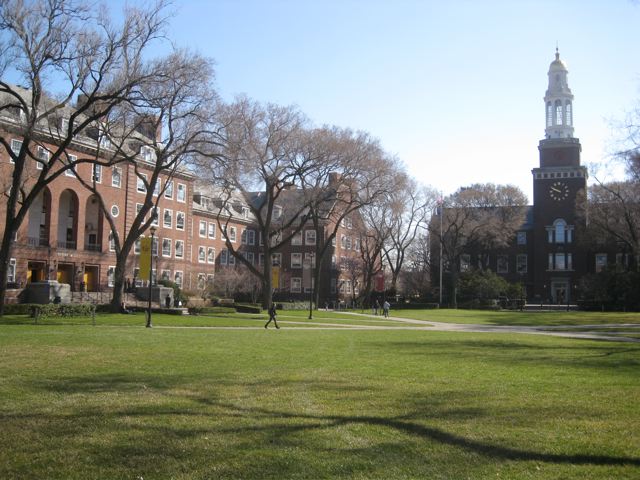