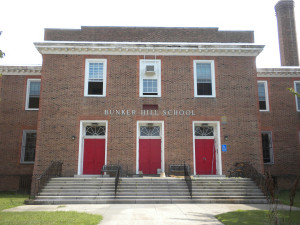 Initial plans were made in 1938 for a full, two-story building for the Bunker Hill Elementary School to replace an earlier school building, but it ended up being built in stages.

A grant of $111,200 from the Public Works Administration (PWA) allowed the construction of the basement and six rooms on a single floor, which became the west wing of the school. All but some finish work was completed in 1939 and the new school opened January 2, 1940.

A National Register of Historic Places nomination gives the details:

“Bunker Hill Elementary School was designed as an extensible school building and was constructed in phases between 1939 and 1953 to replace an earlier school building on the site. The new school building was needed as the surrounding Michigan Park community came to include a growing school-age population. Its construction was strongly urged by the Michigan Park Citizens Association and was built by the city’s Office of Municipal Architect according to designs made by private practitioner Arthur B. Heaton. The school was executed in the Colonial Revival style, the then preferred style of the Municipal Architect’s office (which supervised school construction) and by the Commission of Fine Arts.

The idea of the extensible school building originated in the 1920s in the Municipal Architect’s Office and was intended as a way to expand buildings in an organic manner as the need for larger buildings arose, which in the case of Bunker Hill, it did in the 1940s and early 1950s. Bunker Hill school remains an almost perfect example of an extensible school….”