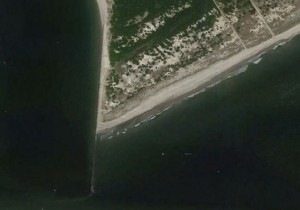 “Breezy Point began in the early 20th century as a shantytown called Irish Riviera. Then, the sandy sliver of land that lies on the far western edge of Rockaway Island was considerably thinner than it is today.

In 1935, as part of the New Deal, the federal government built a jetty to keep sand from accumulating at the mouth of New York Harbor. Behind this boulder jetty, the sandbar grew considerably and allowed year-round residencies.”   (https://www.eenews.net)