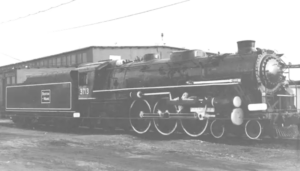 The Public Works Administration (PWA) lent $100,000 to the Boston & Maine Railroad company to purchase locomotive #3713, known as “The Constitution,” built and delivered in 1934.

On May 11, 1934, The Boston Globe reported a $2.5 million equipment purchase by the Boston & Maine Railroad: “The purchases include 21 suburban passenger coaches and 10 air-conditioned de luxe coaches, five Pacific-type passenger locomotives, five mountain-type freight and passenger locomotives, two Diesel electric locomotives, and two Diesel electric switching engines… Money for the purchases was provided by a loan from the Public Works Administration, on which the railroad pays 4 percent interest.”

The five Pacific-type locomotives were numbered 3710-3714. They were built by the Lima Locomotive Works (Lima, Ohio) and delivered to the Boston & Maine in December 1934. A competition in 1937 named engine No. 3713 The Constitution. The winner was J. Schumann Moore, a student at Eastern High School in Lynn, Massachusetts, and her name was put on plates on each side of the locomotive.

The Constitution pulled passengers for the Boston & Maine Railroad—which had routes in Maine, Vermont, New Hampshire, New York, and Massachusetts—for about 22 years, before being retired in 1956. During World War II, the locomotive also served as a troop transport.

The Constitution has had a long history of display, and it is now owned by the National Park Service (NPS). It is undergoing restoration at the Steamtown National Historic Site in Scranton, Pennsylvania, and has been dubbed “America’s Locomotive.” When restoration is complete, The Constitution will pull excursion trains. 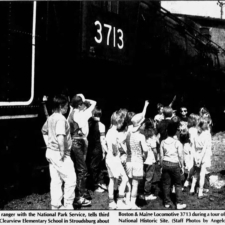 Project originally submitted by Brent McKee on May 9, 2022.