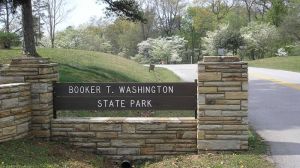 Constructed with funds and labor from the Works Progress Administration and the Civilian Conservation Corps, the Booker T. Washington State Park was established in 1938 as a segregated recreational facility for African Americans, the second such facility in the state of Tennessee (the other being T. O. Fuller State Park near Memphis). The park is situated on Lake Chickamauga, which was created with the construction of the Chickamauga Dam by the Tennessee Valley Authority. The nearby Harrison Bay State Park was built at the same time for white Tennesseans. Tennessee parks were formally desegregated in 1964 with the passage of the federal Civil Rights Act, which outlawed discrimination in public accommodations.

“The Booker T. Washington State Park is located on Chickamauga Reservoir northeast of downtown Chattanooga. The park, established as a state recreation area in 1938, was the state’s second African American recreation area, preceded only by T. O. Fuller State Park near Memphis. The Tennessee Valley Authority (TVA) originally leased land for the park to the state and restricted land use for ‘recreational development.’ In 1950 the state purchased the site for the token price of one dollar and added 150 acres to the reservation. Today, the Tennessee Department of Conservation owns and operates the 353-acre park.

In 1937, when the state opened negotiations for the development of an African American park in East Tennessee, two sites appeared suitable. State officials favored Norris Lake near Knoxville, where the Civilian Conservation Corps (CCC), Works Progress Administration (WPA), and TVA already had started development. In addition, African Americans enjoyed the use of Norris Lake, which had not been designated as a segregated park. Chickamauga Reservoir, another TVA area, just north of downtown Chattanooga, also received consideration. Hamilton County Regional Planning Commission strongly supported a park near Chattanooga and cited the city’s large African American population as justification. In 1937 thirty-eight thousand African Americans (28 percent of the city’s population) lived in Chattanooga, and another forty-nine thousand African Americans resided within a fifty-mile radius of the city. Officials agreed that Hamilton County was more suited for the establishment of an African American facility than Upper East Tennessee. The park, officially established in 1938, was named for well-known African American educator Booker T. Washington.

Park construction began in 1937, when CCC Company 3459 started clearing the land. Company 4497, a Junior African American company, replaced the first group in 1938. Both groups worked under the supervision of the Tennessee Department of Conservation, National Park Service, and TVA. Initial building plans called for the construction of a lodge, personnel quarters, ball fields, tennis courts, picnic areas, outdoor cooking units, boating facilities, cabins, and a dam. World War II interrupted these plans, however, and most improvements were not made until after 1946. Planners abandoned many scheduled improvements because of postwar cost inflation and cost estimates. Pre-war CCC development was limited to land clearance and planning; none of the current recreational structures date to the Depression-era relief programs. At its 1950 dedication, the park included a swimming pool, bathhouses, picnic tables and shelters, camp sites, ball fields, and a fishing area. The state’s Division of State Parks completed the construction using contracted labor.”