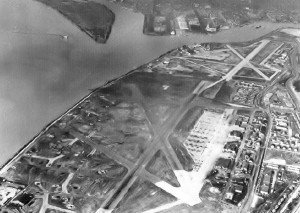 From 1933 to 1942, New Deal agencies were busy at the two older facilities, making improvements of various kinds.  The Works Progress Administration (WPA) made a large number of improvements to Bolling Air Field (now the central portion of the Joint Base).

WPA project cards at the National Archives indicate that a large amount of work on Bolling Field was approved from 1935 to 1940, including improvements to the airfield and, buildings and infrastructure, roads and sidewalks, and landscaping.  That this work was actually completed is confirmed, in part, by reports in the journal Work  in 1936.

Project originally submitted by Brent McKee on May 29, 2013.
Additional contributions by Richard A Walker.