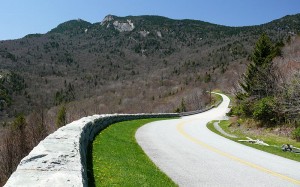 “The Blue Ridge Parkway is a National Parkway and All-American Road in the United States, noted for its scenic beauty. It runs for 469 miles (755 km), mostly along the famous Blue Ridge, a major mountain chain that is part of the Appalachian Mountains. Its southern terminus is on the boundary between Great Smoky Mountains National Park and the Cherokee Indian Reservation in North Carolina, from which it travels north to Shenandoah National Park in Virginia and offers access to the Skyline Drive, the major north/south artery through the Park. The two All-American Byways are separate and distinct. The Blue Ridge Parkway was built to connect Shenandoah National Park to the Great Smoky Mountains National Park…

Begun during the administration of U.S. president Franklin D. Roosevelt, the project was originally called the Appalachian Scenic Highway. Most construction was carried out by private contractors under federal contracts under an authorization by Harold L. Ickes in his role as federal public works administrator. Work began on September 11, 1935, near Cumberland Knob in North Carolina; construction in Virginia began the following February. On June 30, 1936, Congress formally authorized the project as the Blue Ridge Parkway and placed it under the jurisdiction of the National Park Service. Some work was carried out by various New Deal public works agencies. The Works Progress Administration did some roadway construction. Crews from the Emergency Relief Administration carried out landscape work and development of parkway recreation areas. Personnel from four Civilian Conservation Corps camps worked on roadside cleanup, roadside plantings, grading slopes, and improving adjacent fields and forest lands. During World War II, the CCC crews were replaced by conscientious objectors in the Civilian Public Service program.

Construction of the parkway took over 52 years to complete, the last stretch (near the Linn Cove Viaduct) being laid around Grandfather Mountain in 1983[2] . The Blue Ridge Parkway tunnels were constructed through the rock—one in Virginia and twenty-five in North Carolina.”