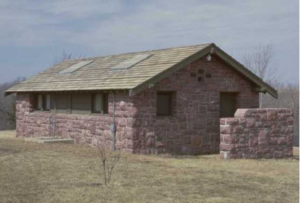 The Works Progress Administration (WPA) pursued a number of improvements at Blue Mounds State Park in Minnesota in 1938. Initial improvement plans called for the “construction of a bathhouse, facilities for picnicking and camping and general recreation.” The WPA also built dams and other structures.

In what was then called Mounds Springs Recreational Reserve, “workers in the WPA (Works Progress Administration) built five structures: a latrine and the upper and lower dams on Mound Creek, which created Upper and Lower Mound Lakes. The rustic style of the structures features native materials such as locally quarried quartzite. Rustic-style architecture, as defined by the National Park Service, is labor intensive, finely crafted, and uniquely American.”

“Blue Mounds State Park WPA/Rustic Style historic resources are located in a historic district that contains four structures and one building constructed along Mound Creek. Development in the park centers on two dams that create two lakes. Between the lakes, Mound Creek tumbles over a rocky gorge. The brightly colored Sioux Quartzite in the gorge is the same stone used in the construction of the park structures. Architects were the National Park Service and the Division of Drainage and Waters of the Minnesota Department of Conservation…

Blue Mounds State Park is historically significant as an important link in the state park system, providing recreational facilities to the extreme southwestern corner of Minnesota.

Blue Mounds State Park historic resources are architecturally significant as outstanding examples of Rustic Style construction built with a remarkably bright rose quartzite. Of exceptional significance are the park’s two dams that incorporate Rustic Style features in their construction. The Upper Dam in particular is an extremely successful example of rustic design applied to a park structure. The dam consists of a stepped spillway built with native stone that blends and merges with the rocky ledges of the natural landscape.

Blue Mounds State Park was originally called Mound Springs Recreational Reserve when the park was established in 1937. The name was changed to Blue Mounds, which is the term for a nearby outcropping of red Sioux Quartzite which forms a cliff about one mile long and up to 100 feet high. The cliff, with the sun setting behind it, appeared blue to settlers going west in the 1860s and 1870s. They named the prominent landmark Blue Mounds” (Minnesota Historical Society).

While the dams built during the New Deal organize the layout of the park as a recreational site, the structures built in the park with WPA funds continue to stand as historic landmarks. 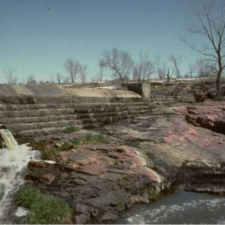 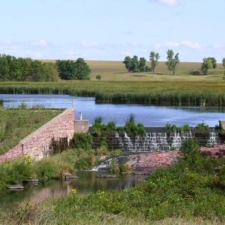