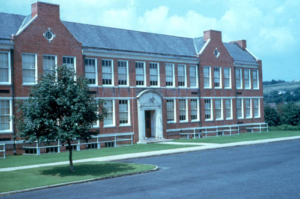 Public Works Administration (PWA) funded the construction of the Navy Hall at Bloomsburg University of Pennsylvania in Bloomsburg PA.

Bloomsburg University of Pennsylvania, then known as the Bloomsburg State Teachers College, benefited during the Great Depression from a large construction project enabled by the PWA. The agency provided a $184,604 grant for the project, whose final cost was $584,097. Construction occurred between January 1938 and July 1939. (PWA Docket No. [W]1866.)

Four buildings were constructed on the campus, including a gymnasium and shop/storage building. The present status of these structures is unknown to Living New Deal.

According to the Bloomsburg University Archives, “Navy Hall, built during 1938 and 1939, was originally intended to serve as a junior high school to complement the elementary school in Ben Franklin. Because of delays in completing construction and the onset of World War II, it only served as a junior high for two summer sessions. When the college began hosting naval training programs for flight instructors and officers during the war, the building was turned over to them to serve as their official headquarters and to provide space for offices, classrooms and storage.  The building was given the informal name of Navy Hall, which it has been known by ever since. At the close of the war, enrollment went up at the college and the Business Education department moved into the building.”