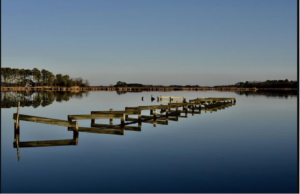 In 1933, the Civilian Conservation Corps (CCC) achieved considerable infrastructural and land management improvements at the formerly-named Blackwater Migratory Bird Refuge near Cambridge Maryland. Maintained by the U.S. Biological Survey, the refuge covers an area of 8,241 acres, including marshes and waters where black ducks and blue-winged teal breed and mallards and pintails concentrate. The site is also refuge to a variety of shorebirds and other wild animals.

In a December 1933 press release, the U.S. Department of Agriculture outlined the role played by CCC workers at the refuge: “C.C.C. camps were established…with a view to making the refuges more attractive to migratory bird life and facilitating their administration and maintenance.” CCC laborers constructed roads and trails, cut fire lines, installed telephone systems, built dams for freshwater ponds, and constructed cabins among other activities.

The refuge – since renamed the Blackwater National Wildlife Refuge – still exists today under the oversight of the U.S. Fish and Wildlife Service. The improvements secured by the CCC in 1933 greatly reduced ongoing maintenance costs at the refuge and set the stage for a wildlife sanctuary valued to this day.