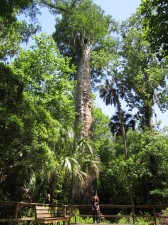 “The Senator was the biggest and oldest pond cypress tree in the world, located in Big Tree Park, Longwood, Florida. At the time of its demise, it was 125 feet tall, with a trunk diameter of 17.5 feet. The tree was destroyed by a fire started by the criminal arson of a meth addict on January 16, 2012… Seminole Indians and other Native American Indians who lived throughout Central Florida used this tree as a landmark. In the late 19th century, the tree attracted visitors even though much of the surrounding land was swamp; reaching the tree was done by leaping from log to log. A walkway was later constructed by the Works Progress Administration.” (Wikipedia)