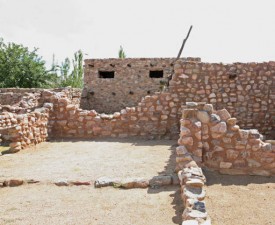 “The park contains remains from a prehistoric communal dwelling constructed by the Salado people. The site was inhabited from 1225 to 1400 A.D. Irene Vickrey conducted the first formal archaeological investigation starting in 1935. Funding for her salary and her laborers came from the Federal Emergency Relief Administration and later the Works Progress Administration. She and her workmen excavated over 200 rooms and 350 burial sites. Vickrey worked on the excavation until January 1946. Her cause of death was due to heart failure due to a long term health condition. Her death left the excavations incomplete and her results unpublished. The site was neglected for 40 years until the City of Globe hired an archaeological team to reevaluate Vickrey’s results and finish the reconstruction of the settlement.”