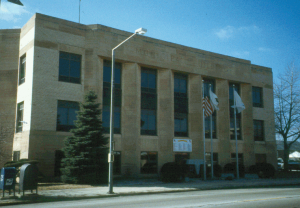 The Berwyn Municipal Building was completed in 1939 as a non-federal Public Works Administration project. The architects Hubert Burnham and Charles Herrick Hammond were chosen by the city of Berwyn. It was built in the Moderne style and the main façade features large blocks of tan limestone as well as tan glazed bricks and unusual prism shaped pilasters. The main façade features a limestone parapet with “Municipal Building” incised into the stone cornice. On either side of these words are two carved emblems depicting homes emitting a stylized ray of light. The building originally functioned as a government office, fire station, city hall, correctional facility, courthouse & library. The construction of the building cost about $190,00, the PWA supplied $85,000 of the funding.

The architects, Burnham and Hammond, designed many of the futuristic buildings at Chicago’s 1933-34 Century of Progress fair. Hubert Burnham (1882-1968) was a son of famous Chicago architect Daniel Burnham. Hubert and his brother Daniel designed Chicago’s Carbide and Carbon Building (1927-28), which is their best known work. Charles Herrick Hammond (1882-1969) served as the supervising architect of the State of Illinois from 1929 to 1940. Hammond joined Burnham’s firm in 1933.
Burnham and Hammond designed a wide variety of commercial and institutional buildings as well as train stations during their partnership.

The Police Department found different quarters in the 1960s. The library maintained a branch in the basement until the early 1980s. All windows and doors were replaced in the 1990s. There was an addition to the building in 1991 to allow for an elevator to make the building ADA compliant. The building still contains the Berwyn City Hall.