The historic former Benton School Gymnasium was constructed, in part, as a WPA project. The building now houses a religious organization.

WisconsinHistory.org:
“A brick gymnasium structure that has a round arched roof. Round recessed arched areas that unite the two level, single windows decorate the arched front facade. White stone bands contrast with the brick to form a decorated pattern on the symmetrically designed frnot facade. The projecting central bay emphasizes the four doored entrance. The auditorium addition was constructed as a WPA project. This building is important as a visual landmark to the community and some architectural importance as a WPA project. The Benton School Gymnasium is associated with the development of education in Benton. It was also WPA Project of the 1930s. The gymnasium was built in the late 1930s and is now connected to the elementary school. It was originally used as the high school gym until the mid-seventies when the new high school was built. The Works Progress Administration funded the project in part.” 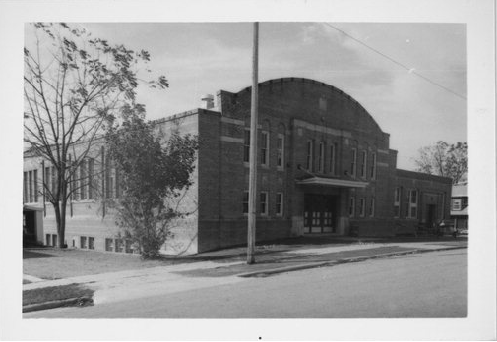 Archive Photo. Used with permission of the Wisconsin Historical Society.