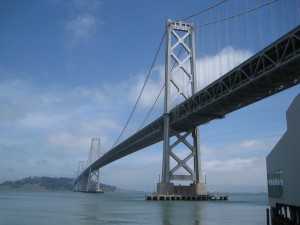 The San Francisco-Oakland Bay Bridge, one of the most famous bridges in the world and the key transportation link in the Bay Area, was built under the New Deal with funding from the Reconstruction Finance Corporation (RFC).

The 8-mile long bridge (43,500 feet) consists of two parts, both anchored to Yerba Buena Island in the middle of San Francisco Bay.  The western half is an elegant suspension bridge (whose beauty has always suffered by comparison with the Golden Gate Bridge, but gained a delightful electronic light show in the 2010s). The longer  eastern half was a classic cantilever bridge, ungainly but astonishing in its own way. The original design had one deck for automobiles and the other for trucks and trolleys.

The Bay Bridge was authorized by the state in 1929, which set up a California Toll Bridge Authority and created a special Bay Bridge division of the state Department of Public Works in 1931. Charles Purcell became the Chief Engineer and Glen Woodruff did the engineering design work.

Finance was a problem in the midst of the Depression, so the state turned to the federal government.  Talks began with the RFC, newly created under President Hoover in 1932. The RFC agreed to buy $60 million in Toll Bridge Authority bonds in April 1933.  Construction began in July 1933 and was completed in less than three and one-half years, opening in 1936.

The principle contractor was American Bridge Company, with fourteen subcontractors, including Oakland’s Henry Kaiser.  The total cost of the bridge and approaches was $77 million (the state alone paid for the San Francisco onramps around Rincon Hill and the East Bay Distribution Structure (now known as the MacArthur Maze).  Two dozen men died in the construction process.

“The Bay Bridge is the longest steel high-level bridge in the world…Its foundations extend to the greatest depth below water of any bridge built by man; one pier was sunk at 242 feet below water, and another at 200 feet. The deeper pier is bigger than the largest of the Pyramids and required more concrete than the Empire State Building in New York.

On the San Francisco side of Yerba Buena Island, the structure consists of two complete suspension bridges with a central anchorage in the middle. The towers of the suspension rise 474 and 519 feet above water. Over the east channel, the span continues with one main cantilever span of 1,400 feet and, east of this, five truss spans each measuring 509 feet. The two cables supporting the suspensions are each 28 3/4 inches in diameter, and each contains 17,664 wires; the total length of these wires is 70,815 miles, which is enough to encircle the earth three times…”

The western half of the bridge was named for former San Francisco Mayor Willie Brown in 2014. The eastern half suffered damage in the Loma Prieta earthquake of 1989 and was replaced after years of debate over the new design, opening in 2016.