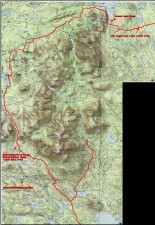 Topographic map of the park and some of the projects worked on by the CCC.

“Baxter State Park is a large wilderness area permanently preserved as a state park, located in Piscataquis County in north-central Maine. The Park was established by 28 donations of land, in Trust, from Park donor Percival P. Baxter between the years of 1931 and 1962, eventually creating a Park of over 200,000 acres (809 km2) in size.”   (http://www.ohranger.com)

During the 1930′s, the Civilian Conservation Corps workers from Camp Millinocket, camp Foster Field, camp Baxter Park, & camp Avalanche Brook on the south end worked on access roads in the Mount Katahdin region, including a gravel road from Lake Ambejejus northward between the Togue Ponds and Windy Pitch on the east side of Katahdin along with the completion of the Appalachian Trail at the summit of Mount Katahdin. A wire suspension bridge was built at Nesowadnehunk Falls for hikers of the Appalachian trail but it no longer exists. Camp Lake Hay worked on access roads from the North East side of the park in very remote and rugged terrain, where work began on building the road south towards Mount Katahdin, a project which was to ultimately intersect with the Greenville Camp’s roadwork along the west side of the mountain range, also building the Grand Lake Dam and a steel girder bridge that were built in Mattagamon Township 6, Range 8 on the East Branch of the Penobscot River.