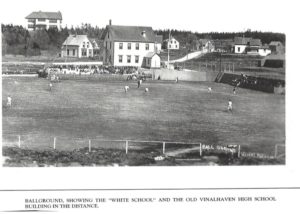 “The Athletic Field at Vinalhaven may well be classed as a fine type of work project – a project on which the ERA, the town and private citizens cooperated to make possible work, health and pleasure.

About thirty-five years ago Vinalhaven granite was being cut and shipped throughout the country, the harbor was crowed with fishing vessels, and baseball “fever” ran high. The use of a piece of swampy pasture land was obtained from the owner. Stumps were grubbed, open ditches dug and the worse parts of the field filled. A diamond and small bleachers followed. From time to time improvements have been made. However, the diamond was flooded by high tides and the out-field spongy and uncertain.

In the summer of 1934 an ERA athletic field project was started. With a land surface at approximately sea level proper drainage together with some form of tide control was imperative. Additional land was asked for and obtained from the owner and a complete system laid out. Actual work was started late in July. Eight thousand five hundred and eighty-one man hours and 1,026 truck-owner-driver hours were used.

Approximately 1,250 feet of ditch was dug to an average depth and width of 3 feet. Six hundred and eighty feet of this ditch system was paved with granite, walled with old paving-blocks (blocks 10″ to 12″ x 6″ x 4″) capped with granite slabs and covered with earth. The balance of the ditch was walled and rock filled. The flow from the entire system is toward one main drain. (All granite used was given by local owners.)

The main drain runs under a town road (Note: 48 pieces of drilled granite 4′ x 14″ x 8″ was used in conjunction with other stone in this work) to the tide-gate. Concrete was used here for the construction of base and side walls; a heavy, swinging, close fitting iron gate was hung; and an open rock-walled trench carried to open water. Flow from the land readily passed out through the gate but pressure of the incoming tide closed it and prevents flooding of the playing field and saturation of the land with sea water.

Crushed stone, earth, sand and gravel were used to fill and grade the outfield and diamond.

Two bleachers with a total seating capacity of 480 were built. Three hundred spruce logs (average 16′ x 7″) were peeled for the cob-work foundation and a body of the stands. Two inch plank was used for seats and flooring. Over four cords of three to four inch peeled spruce went into side-wall and front fence. One hundred and forty standard fence posts were used in and around the grounds. The greater part of the logs, posts, etc., was given by private citizens. All lumber, hardware and building material was furnished by the town.

The past winter a 300 x 100 foot section of the field was banked and flooded for skating and hockey. Tennis courts are planned for the future.” MERA

According to the 1935 Vinalhaven town report, local expenses for material, trucking, and food came to $744.34

A 1935 newspaper article details how the ball field was originally built in 1902 and gives a hilarious example of how poor conditions were due to flooding during high tide, “This player, whose name is forgotten, vividly described a baseball game he played on the old Vinalhaven ball field after a high course of tides had flooded it. According to his story, sea weed grew so luxuriantly around the bases that he had hard work to get their exact location, clams continually bothered him by squirting water in his eyes, and he claimed that part of the regulation uniform of the Vinalhaven team was a pair of long legged rubber boots. But bless his unknown soul. Those days are gone forever.” “A new score board has been erected with decorations by Sidney Winslow, large and the patron in any part of the bleachers can readily read what the score and inning is. The town road which goes around the ball park from the White School house to Stony Lonesome, so called has been raised and resurfaced and makes a good approach to the park.” O.V. Drew

” 1934 July 1, Repairs are being made on the ball ground and the school ground of Washington building. Fine followed by cloudy Sunday, with distant thunder. Around home in A.M., attended ball game in P.M.
August 11,. Extensive improvements and repairs have been made on the ball ground at School St.
November 24. A continuation of the ERA work on the ball ground is in progress. There will be 8 weeks work but only for those who are “on the welfare.” I understand that $1000 is the allotment. Needless to say I will not work on this job. Later I heard that the allotment is $2,000.
December 31. The C.W.A. was succeeded by the F.E.R.A. which is now employing a comparatively small crew who work two days per week with a wage of $5.60 for the two days. That is about all the work that is going on in town as this year ends.
1935 June 2. A fine Sunday. Temp 55 degrees at 6 PM. A fine June day. Attended Ball Game. Official opening of Vinalhaven’s Ball Ground. It’s the same old ball ground that we’ve had since 1902 but has been greatly improved through government projects. The event was celebrated by a flag raising and baseball game. The game between the “Orioles” of Orono and the Vinalhaven Chiefs ended with a score of 7 to 6 in favor of the home team. The Vinalhaven Band finished music for the occasion.” Sidney Winslow a CWA/ERA worker